Thumbs Up For Market-Octavia and 55 Laguna

A busy week prevented me from posting about this earlier, but better late than never: as you may have already read in the Chronicle, there have been favorable updates at the Board of Supervisors concerning the Market & Octavia Plan, which I addressed in a post a couple weeks ago. Supervisors Mirkarimi and McGoldrick had articulated competing visions for the contentious issues of affordable housing, parking, and density in the Market & Octavia plan area: more details are provided in that linked post. But the two proposals have since coalesced into a single compromise plan. Thankfully, Mirkarimi’s stricter parking requirements survived, helping to ensure that the Market & Octavia Plan maintains livability at its heart; the compromise also adopted Mirkarimi’s affordable housing funding plan, which set forth a tiered impact fee (of $0, $4, or $8 per square foot, depending on the location of the development) and the opportunity for developers to contribute to the citywide affordable housing fund in lieu of TDR fees. However, the compromise incorporates McGoldrick’s density cap, which will apply not just to Duboce Triangle, but to all blocks zoned as Residential Transit-Oriented (RTO), which includes most of the residential blocks deeper in the plan area, off of Market Street. These amendments were passed at first hearing at the Board last Tuesday, finally drawing some consensus on this comprehensive plan that has been highly contested in recent months. 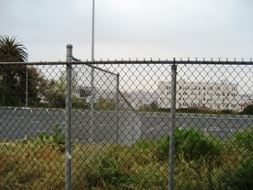 While on the subject of Market & Octavia, an additional topic we cannot neglect is the 55 Laguna redevelopment of the UC Extension site (pictured in the above two images), which is listed on the National Register of Historic Places. In December 2003, the UC Berkeley extension relocated off the 55 Laguna site, which lies near the geographic heart of the Market & Octavia Plan area. The AF Evans 55 Laguna development has been the subject of separate but concurrent discussions at City Hall.

A controversial issue was the need to rezone the site from public to a designation appropriate for a mixed use neighborhood. The project was protested and appealed on several bases — including compliance with CEQA, the National Historic Preservation Act, and NEPA on the basis of potential HUD funds for the affordable housing component — expressing concern that the demolition would constitute a substantial adverse change that would cause the site to lose historical preservation tax credit and to be de-listed as historically significant resource. But while the appellants disapproved of the project’s current incarnation, their contentions did not unearth any true inadequacies in the EIR, and so the requisite zoning amendments eventually passed through committee and onto the full Board, where they were first passed last week — creating a special use district bounded by Laguna, Haight, Buchanan, and Hermann Streets to facilitate the 55 Laguna project. This replaces the site’s public zoning, but merely zoning a parcel as public is no guarantee that the land will actually enjoy vibrant public use, as this site clearly demonstrates. The UC Extension’s blank walls have had a deadening effect on the surrounding neighborhood, giving the institution the feel of a fortress. 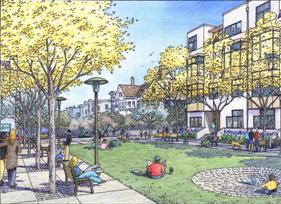 Fortress or no fortress, total demolition of this historic resource would be a highly significant loss; but the project plan is a far cry from total demolition. Although the plan calls for the demolition of Richardson Hall Annex and Middle Hall Gymnasium (the oldest building on campus), 83% of the historically significant square footage — located in Richardson Hall, Woods Hall, and Woods Hall Annex — will be retained and reused in the complex, which will also include seven newly constructed buildings. Unique features like the WPA-era Reuben Kadish mural, which was added in 1936, will also be incorporated into the new plan site. Meanwhile, the deadening retaining wall would be opened up to provide a retail frontage onto the street. Perhaps best of all, surface parking and chain link fences will be replaced with public amenities and a major housing component that received a booster shot of affordability from Mirkarimi: over 400 new rental units, of which 36-37% are affordable at 50% of AMI, including the Openhouse project, an eight-story building with close to 90 affordable units welcoming to LGBTQ seniors. In terms of public amenities, there will be about 5,000 square feet of commercial space, a 12,000 square foot community center in Woods Annex, and 35,000 square feet of public open space that includes a garden and a park bridging the two halves of Waller Street. Although Mirkarimi has expressed a desire for it to relocate in the near future, the UCSF Dental Clinic and its associated parking will also remain on the site.