This website has featured a number of posts that experimented with mapping out a more complete and robust rapid transit network for the Bay Area, with a focus on the urban areas of San Francisco and the inner East Bay of Oakland and Berkeley. This page is an organizational home base for those various posts. The maps here focus on San Francisco, Oakland, and Berkeley not only because this region is where most Bay Area transit riders are, but also because the urban core has been sadly neglected while BART has extended and continues to plan future extensions further and further into exurban hinterlands — a trend I would very much like to see reversed, for many reasons.

Despite the heading of this page — fantasy transit maps — the maps are based on “real life” considerations, including, to varying extents: ridership patterns both present and anticipated, engineering feasibility, cost, the greater goal of creating a rapid network, and land use/development potential. (One remark: although transit inevitably can become highly politicized, this is often to the detriment of building an effective project — so one factor these maps do not take into account is the inevitable political wrangling that would eventually occur once projects are proposed.) Based as they are on these considerations, the maps are not a complete fantasy, but at the same time, the goal is to present a more expansive long-term vision than what is currently being discussed officially. Depressing though it may be to say, we do want to be upfront about this: at the rate transit projects in the Bay Area are planned and built, some of the proposals in these maps would take, at a minimum, decades to complete.

A couple early posts began by looking just at rail expansion. The San Francisco subway map differentiates between BART and Muni Metro expansions. The East Bay rail map is especially fantasy-oriented in that its expansions are marked (by default) as BART. More realistically, a new AC Transit light rail division would serve the highest ridership corridors more than adequately. The rail maps:

The next set of maps draws out an expanded bus rapid transit (BRT) network, presenting a cost-effective alternative to costly subway tunneling while still capturing some of the benefits of rail through a dedicated right of way and station platforms. These maps were developed in response to a greater interest among Bay Area transit planners in the BRT mode following its success in places like Curitiba, Brazil and Bogotá, Colombia. They include the three BRT corridors currently in planning (Geary Boulevard and Van Ness Avenue in San Francisco, and Telegraph/East 14th Street in the East Bay) and use those as a framework around which to build out the rest of the network. The BRT maps:

Admittedly, the rail versus BRT division of the maps is artificial and was chosen mainly to simplify map plotting. It is counterproductive and a bit silly to focus on expanding only one transit mode. The best solution is to mix and match, prioritizing corridors and choosing the modes that best serve both present and future demand along those corridors. As such, none of these maps is a complete proposal on its own. The ideal transit fantasy map would really be a combination of the maps presented here, implementing rail in some places and BRT in others.

To read more about these particular maps, including links to full-size images and zoom-ins on downtown San Francisco and downtown Oakland, please see these posts:

More recently, an April Fools Day posting pretended that Bay Area regional planning authorities were interested in pursuing an expanded urban transit network — a sad commentary on the current state of affairs, because it includes projects that we are not planning now, but ought to be. A couple maps were also prepared in connection with that post:

Finally, our last fantasy map (for now) rethinks the mostly suburban, transit-hostile Silicon Valley. An expensive BART extension is planned for Milpitas, San Jose, and Santa Clara — but for a number of reasons, we believe this project to be flawed and not worth its expensive price tag ($7.6 billion). In lieu of BART to San Jose, we would propose that Santa Clara County redirect the funding it intends to allocate to BART, and instead build a network of commuter rail, light rail, and bus rapid transit — which would trigger more widespread land use changes throughout Silicon Valley. In that sense, our South Bay fantasy map is not at all fantastical, but is eminently practical. To read more, please refer to these posts:

And finally, the maps. The left map presents the planned BART extension, while the right map includes Caltrain Metro East and a collection of local transit projects: 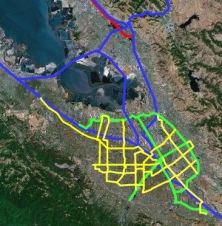