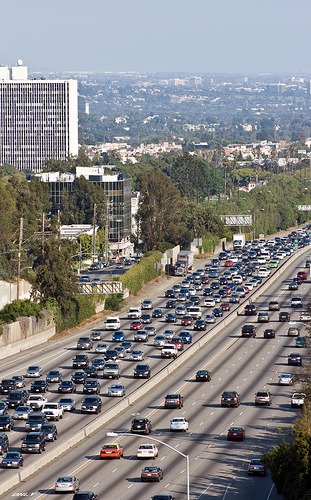 At its meeting yesterday, the State Air Resources Board (ARB) had a full agenda.  For one, it approved an important regulation requiring that one-third of electricity sold by utilities in California be derived from renewable sources by the year 2020.  But for the purpose of this blog, we will only discuss the Board’s other major action of the day: the adoption of final regional targets under Senate Bill 375 for reducing greenhouse gas emissions from passenger vehicles and light duty trucks.

Although ARB staff’s proposed targets were released well over one month ago, there has been, not surprisingly, some drama playing out in the eleventh hour.  Protests claiming that these proposed targets are dangerous and unachievable have appeared in California newspapers this week — from the builders, naturally, but also from Jim Spering and Bill Dodd, Bay Area county supervisors who sit on the Metropolitan Transportation Commission (the same body that supported the more ambitious Bay Area targets back in July).

At the ARB meeting, Santa Clara County supervisor Ken Yeager, who is also an MTC commissioner and ARB member, publicly disdained his fellow commissioners Spering and Dodd for misrepresenting the Bay Area’s preferred targets as “extreme” and “unrealistic” in their Mercury News opinion piece.  Compounded by the fact that builders have specifically misused preliminary Bay Area scenarios (developed to inform the target-setting discussion at ARB) in order to “prove” that more ambitious targets are infeasible and would wreak havoc during the recession, Yeager called upon Steve Heminger, MTC’s executive director, to testify specially in defense of the Bay Area’s preferred targets.  ARB ultimately adopted those same targets.

SB 375 has been a recurring topic on this blog, and newer readers interested in this topic are encouraged to peruse the archives.  Briefly: last month, staff at ARB released its proposed targets.  These were mostly the direct product of a collaborative “bottom up” process, in which ARB based its recommendations on data submitted by metropolitan planning organizations (MPOs) indicating what targets would be achievable and/or ambitious in each region.

The Board has now unanimously adopted the following regional targets for the years 2020/2035, expressed as a per capita GHG reduction from 2005 levels:

There were a couple refinements of the staff proposal.  Some smaller MPOs, including Monterey Bay and Santa Barbara, stepped up to the plate and volunteered to do better than business as usual, in order to participate more fully in this statewide effort; ARB was happy to oblige.  In addition, ARB resolved to resume discussion with SCAG in February over its disputed targets (see discussion below).  But by and large, the adopted targets closely mirror the staff proposal.

The Debate Over Targets

Caught in the middle of the maelstrom of technical modeling exercises, political will, legal concerns, and persistent stakeholder advocacy is the debate over SB 375 targets.  The targets are essentially goals, not regulations, and they are certain to evolve over time.  Indeed, ARB already plans to revisit the targets in four years’ time.  Moreover, a metropolitan planning organization is not subject to sanctions if it determines that it cannot achieve its target.  Perhaps, then, it seems that the debate isn’t even worth all the fuss — particularly because even the targets that have so far been termed “ambitious” likely aren’t good enough to realize the desired overall emissions reduction.

Yet the targets are mandated, and if they do their job, they should have some effect on how planning is carried out in California.  SB 375 is written so that most of its benefits are conferred when an MPO demonstrates that it actually can achieve its assigned target — and that’s enough to convince some that the top priority should be simply to produce an achievable target, even if it’s not especially ambitious.  For others, stopping anywhere short of ambitious undermines the urgency of the need to take action on climate change.  So the debate has taken a life of its own.

Aside from the MTC scuffle described above, government officials elsewhere in California had also urged ARB to reject its staff’s proposal and instead adopt milder targets.  At its meeting on September 2, 2010, the SCAG Regional Council (on a divided vote of 29-21) rejected the ARB staff proposal, and instead supported targets of 6% reduction in 2020 and 8% reduction in 2035.  Moving forward on anything more ambitious was conditioned on a list of eleven other actions being taken — including acceleration of Measure R projects under the 30/10 initiative, and restoration of transit operating funds from the State — actions over which ARB itself has no control.  But the Regional Council’s decision should not be taken to mean that all of Southern California is uninterested in taking SB 375 seriously.  Not only have individual local governments in the SCAG region embraced the challenge posed by ambitious targets, but the Los Angeles MTA has snubbed SCAG (PDF) by indicating its support of ARB’s more ambitious recommendation.

Moving forward, ARB will continue to exchange technical information with the MPOs, and in particular, ARB has committed to further target discussion with both SCAG and the eight San Joaquin Valley MPOs.  In preparing their upcoming regional transportation plan updates, MPOs will quantify the greenhouse gas reductions that can be realized through compact development, infrastructure expansion, pricing, and transportation demand management.  The goal for each region will be to demonstrate how implementing a combination of such measures will achieve its assigned target — if the target can indeed be achieved — by preparing a Sustainable Communities Strategy that aligns regional transportation with housing need.

Setting targets is not the end of the story, but rather, the beginning.  In adopting final targets, ARB has set in motion a new process for regional planning in California.  Although it’s easy to become entangled in emissions reductions and modeling assumptions, it’s important to remember that SB 375 is also about improving quality of life and public health, by changing the way that California thinks about and builds its cities.  Only time will tell how effective these efforts are — but the fun has just begun.

« First Bay Area HOT lane opens for business
A new direction for the BART Board of Directors: The choice is ours »