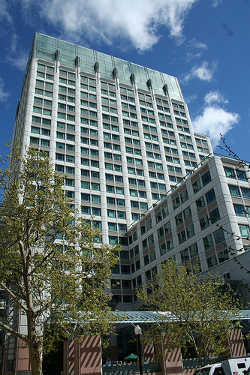 Cal/EPA and ARB in Sacramento.
Courtesy of Capitol Weekly.

In Senate Bill 375, the Legislature required the State Air Resources Board (ARB) to establish regional targets for reducing greenhouse gas emissions in California attributable to vehicles and light duty trucks.  ARB will release draft GHG targets by June 30, 2010, and will continue to cooperate with the state’s metropolitan planning organizations (MPOs) throughout the summer to refine those targets to meet the final deadline of September 30, 2010.  ARB is authorized to select an appropriate metric, and the agency has so far favored a percent per capita GHG reduction from 2005 levels as its preferred metric for expressing the targets.

SB 375 gives MPOs the opportunity to suggest their own recommended regional targets to ARB.  ARB will certainly consider that input, but it is not bound to adopt those recommendations.  MPOs throughout California have mobilized, analyzing different land use and transportation scenarios that could reduce GHG emissions in their respective regions.  There will be opportunity to carry out this analysis using more robust models in the future.  For now, the goal is simply to get a sense of what scale of emissions reduction we can expect to see from regions throughout the state.  What level of reduction would be ambitious, and what level of reduction would be merely achievable?  What are the ideal targets that are ambitious, yet still achievable?  Should the goal be to have every region in California meet its regional target right away, to help generate broader support for SB 375 — or would that require setting the bar too low, thus undercutting the urgency of addressing climate change?  Would it instead be better to reward regions that are interested in setting ambitious GHG reduction goals for themselves?  To what extent should the economic downturn be taken into account when setting the interim draft target, for the year 2020?  ARB must consider these difficult questions, among others, as it works towards the fast-approaching June 30 deadline.

The Challenge of Regional Differences

The complexity of ARB’s task is compounded by the multitude of on-the-ground conditions present in regions throughout the state.  The area of land governed by California’s MPOs accounts for approximately 98% of the population and 97% of GHG emissions.  These regional governments oversee a tremendously varied terrain, including large cities, mild-mannered suburbs, tiny populated pockets, agricultural land, and scenic open space.  But the premise of SB 375 — that pursuing efficient land use patterns near transit will reduce vehicle miles traveled (VMT) and GHG emissions — is a strategy based on an essentially urban experience.  There is good sense to that: the urban areas generate more VMT.  In 2005, VMT in most of California (excluding a few counties lacking data) was 830 million on a weekday, and almost 87% of that total was attributable to the Southern California, Bay Area, San Diego, and Sacramento regions.

Sprawl in the Sacramento Valley.
Courtesy of Uncle Kick-Kick.

Yet for however much SB 375 may seem to be a directive issued primarily at California’s major cities, the bill’s promise and eventual legacy lies in how it will influence emerging cities whose unsustainable growth patterns helped make the case for SB 375 in the first place.  The Central Valley, a region whose fast growth has been fueled by proliferating sprawl, emphasizes why SB 375 is needed.  Indeed, one plausible approach for setting targets is to place the most ambitious requirements on those regions that are projected to experience the most growth — in order to maximize the amount of new growth around the state that is leveraged to serve SB 375’s goal of VMT reduction.  But if the Central Valley embodies the promise of SB 375, it likewise illustrates the challenge of setting GHG reduction targets that take into account each region’s on-the-ground realities.

An alternative approach is to assign more conservative targets to the San Joaquin Valley and smaller MPOs.  The necessary backbone of VMT reduction is the regional transit network — but these areas of the state currently have weak transit systems and may experience significant difficulty procuring the funding to significantly improve service and infrastructure in the near term.  The requirement that a Sustainable Communities Strategy be consistent with prevailing fiscal constraints prevents regions from making unrealistic assumptions about how much funding for transit will be available.  Limitations on an MPO’s ability to expand its transit network may correspondingly limit the magnitude of achievable GHG reduction.

Interregional trips also pose a challenge.  These are the trips that start and/or end in a different region from the home region, and they often reflect the long commutes made necessary by a regional housing/jobs imbalance — one of the problems that SB 375 seeks to mitigate.  A particular instance of this problem is Kern County, which is situated between Fresno and Los Angeles.  Because of this location, about 30% of Kern travel is actually straight through the county, where trips both begin and end outside of Kern.  These travel patterns create a significant category of GHG emissions beyond Kern’s control.  Those emissions could be omitted from a regional target, or they could potentially could be addressed by pursuing an interregional Sustainable Communities Strategy (a provision in SB 375 that is special to the San Joaquin Valley).  Other categories of interregional travel including trips that begin or end in another state or country, reserved tribal lands, or a military base.  In addition to interregional trips, another obstacle in Kern County is the growth of distinctly rural sources of employment, including prisons, the military, and the Tehachapi Pass wind farm.  These jobs generate long commutes from Kern’s most natural urban infill center in Bakersfield.

The particular on-the-ground challenges that Kern County and other parts of the Central Valley bring to the target-setting process emphasize the importance of California’s high-speed rail project, which, while distinct from SB 375, may nonetheless prove critical in realizing SB 375’s vision.  High-speed rail would finally provide the Central Valley with the much-needed high-quality transit spine that California has lacked, thus capturing some interregional trips and reducing the magnitude of GHG emissions that are beyond the control of counties like Kern.  High-speed rail also presents the best opportunity to transform Valley downtowns into true mixed-use transit hubs that can attract new investment.

The purpose of this post was to illustrate, certainly not exhaustively, a few of the many factors that play into the complex process of setting draft GHG targets.  In the next post, we take a look at what initial work has been done toward setting a draft target for the Bay Area.