Orange Line BRT, at Warner Center. The Orange Line corridor has been identified as a demonstration project to receive SB 375 funding from the Air Resources Board. Photo courtesy of Flickr user resedabear.

On September 23, 2010, the State Air Resources Board (ARB) assigned greenhouse gas reduction targets to California’s regional metropolitan planning organizations (MPOs), moving Senate Bill 375 forward into its implementation phase and setting in motion the first regional planning cycle required under the legislation.  ARB adopted final targets that express each metropolitan region’s goal as a percent reduction in per capita emissions from the year 2005.  Regional targets will be revisited in four years but were provided for the years 2020 and 2035 to guide long-term planning.  The target-setting process (see generally the posts from 2010 in the archives for more discussion) focused principally on California’s four largest MPOs, which were assigned the following targets:

There were strings attached to the Southern California targets.  Voting 29-21, the SCAG Regional Council had rejected these proposed targets on September 2, prior to their being adopted by ARB.  The Regional Council instead supported milder targets of -6 percent in 2020 and -8 percent in 2035, maintaining that targets any more ambitious than these would be appropriate only if several conditions were met.  But ARB, which had a September 30 deadline to meet, affirmed its commitment to the more ambitious targets of -8 and -13 percent proposed by agency staff.

That commitment was, however, accompanied by a compromise facilitated by Riverside Mayor Ron Loveridge, who sits on ARB.  SCAG capitulated on the -8 percent target for 2020, but final acceptance of the -13 percent target for 2035 was conditioned on the outcome of further discussion between ARB and SCAG.  The issue remained unresolved until recently.  What is interesting is not so much the fact that a resolution was reached, but the manner in which it was reached and how it reflects the challenges moving forward. 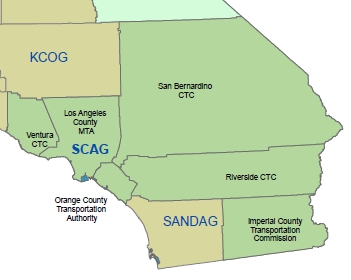 The Southern California Association of Governments (SCAG) is the analogue in the Los Angeles area to the  Metropolitan Transportation Commission (MTC), but SCAG is notable for the sheer size and population of its jurisdiction (marked in green in the map at right).  SCAG governs more than 38,100 square miles extending from the Nevada state line and the Colorado River to the Pacific Ocean, and almost half of California’s population calls the SCAG region home.  At quadruple the land area of the nine-county Bay Area, the region includes about 190 cities and 6 counties — Los Angeles, Orange, Ventura, San Bernardino, Riverside, and Imperial.

SCAG, in other words, is a key player in this business.  ARB has an interest in seeing that each of the “big four” MPOs, including SCAG, is able to adopt a Sustainable Communities Strategy (SCS) that will actually achieve the targets assigned to each region.  It is adoption of the SCS that aligns each region’s transportation network and funding with a transit-oriented distribution of housing that will help reduce vehicle miles traveled (VMT); an Alternative Planning Strategy (APS) simply does not carry the same benefits.  But it would be difficult to name this effort a success if SCAG, the state’s largest MPO, did not meet its regional target.  The SCAG region generates about half of the total greenhouse gas emissions statewide that are the focus of SB 375 — which means that if the legislation is to have maximum effect, ARB needs to have SCAG on board as a fully cooperative partner.

The Quest for Funding

At least the more strategic members on the SCAG Regional Council must have realized that this dynamic could give Southern California an edge in its dealings with ARB.  Perhaps, then, it’s not surprising that of the “big four” MPOs, it was SCAG that opposed ARB and even went so far as to place conditions.  In particular, the Regional Council indicated that it could not support ambitious targets unless certain conditions were met.  Those conditions included: (1) restoration of State transit funding; (2) acceleration of Measure R transit projects under the 30/10 initiative; (3) providing more money that SCAG can grant to local government planning efforts; (4) commitment by ARB to pursue more funding for SB 375 in the Legislature; (5) commitment to obtain more federal, state, and local funding sources that can be devoted to transportation demand management and pedestrian, bicycle, and transit projects; and (6) continued cooperation from ARB, regional entities, cities, and county transportation commissions.

These conditions manage to be both unreasonable and logical at the same time.  Unreasonable — because ARB does not have the authority to meet these conditions even if it wanted to, nor was it required by the Legislature to meet them in any case.  And yet also logical — in that the conditions collectively recognize the longstanding mismatch in California planning, where state leaders in one breath encourage the construction of transit-oriented development, and then in the next breath deprive transit of the funding it needs to survive, let alone thrive.

The SCAG conditions emphasize that there are at least two distinct categories of funding that are crucial to the success of SB 375, and yet are currently in short supply.  The first category is transit funding, which includes both capital dollars to extend high-quality transit to new places and operating dollars to keep the system running.  The bottom line here is that if we want to reduce driving by encouraging “TOD,” we need to have enough “T” to support that TOD.  Proposition 26 complicates the task of setting up new revenue streams for transit, but as Damien Newton recently reminded us at Streetsblog Los Angeles, an additional challenge will be coping with already existing revenue streams that are now reduced in magnitude thanks to the economic downturn.

The second category, which interfaces directly with SB 375 implementation, is the funding that governments need to do planning.  Whether taking the form of general plan updates, neighborhood specific plans, or corridor plans, cities and regions need money to do this work.  It is, after all, these very planning efforts that will be incorporated into the SCS and will ultimately create the desired land use changes on the ground.  Unless local governments have the resources to plan and zone for the sustainable communities envisioned in the SCS, SB 375 will fall flat on its face.

It is this second category of funding that was the focus of SCAG’s recent discussions with ARB.  SCAG has now agreed to accept the more ambitious -8 and -13 percent targets that ARB adopted in September.  But in exchange, SCAG was able to extract at least a little funding from ARB.  The SCAG Compass Blueprint is a program providing competitive grants to local governments that propose exemplary sustainable planning projects.  Because the program has attracted a great deal of interest, SCAG can fund only a fraction of the applicants.  ARB, to fulfill its agreement with SCAG, will provide contract funds for three Compass Blueprint demonstration projects, two of which could serve as models of statewide interest: (1) a specific plan to examine how existing industrial land uses can be adapted for mixed use development; and (2) a corridor plan for stations along the Orange Line, a 14-mile bus rapid transit corridor running from the North Hollywood Red Line station to Warner Center.  The latter plan, which would study both the existing BRT corridor and the extension under construction, was selected to examine TOD and multimodal access in the context of an important transit corridor.  No similar demonstration projects were selected from other regions of the state.

The money that ARB is contributing, which looks to be just shy of a half million dollars, is really just a tiny fraction of the funding that local and regional governments throughout California will need to do more SB 375-related planning.  This isn’t to say that no other funding has been made available.  The Strategic Growth Council is distributing three cycles of Proposition 84 money to fund these efforts, and has in fact already distributed over $7 million to MPOs to fund their work on SB 375.  Moreover, federal grants, including those sponsored by the USDOT-HUD-USEPA Sustainable Communities partnership, have been awarded to projects nationwide in furtherance of goals that are harmonious with SB 375, and California projects could be competitive to receive these grants.  Yet the future status of these funding sources is uncertain.  Although the ability to fund planning is critical to SB 375’s success, we lack a dependable revenue stream that is adequate to meet the demand for these funds throughout California.

« Facebook page
Laying the groundwork for a Sustainable Communities Strategy »