About a month ago, I posted two dream subway maps for San Francisco and the East Bay. The goal of that exercise was to correct some of the inadequacies of the current BART and Muni Metro systems, as well as to identify additional corridors that are candidates for rail expansion. As much fun as it is to imagine riding such a subway system, actually building out that system would cost billions upon billions of dollars. It would also take decades, but bus service is in desperate need of improvement right now and will be even more so in thirty years. Heavy rail should be seriously studied in select locations, but for corridors with a lower transit demand, bus rapid transit is a better fit. A BRT network may not involve glamorous subway tunnels, but it will improve service across the whole system faster and at a fraction of the cost, thereby making transit an attractive option for more people.

Many of San Francisco’s most popular neighborhoods feature a crowded main street, and as fun as it may be to stroll down these streets, they present a transportation challenge, particularly if we do not resort to tunneling. These commercial districts are often old and were designed for pedestrians, reducing both buses and autos to a crawl. Providing quicker and truly reliable service requires that buses be given an exclusive right of way, but many of these streets are narrow, with just one lane in each direction. Naturally, any proposition that requires wholesale elimination of on-street parking will raise hell, so an exclusive guideway will not be possible in many locations. The best we can do for these particular corridors — streets like Haight, Fillmore, Polk, and so forth — is to make smaller changes to smooth out the rough edges of the riding experience. In some cases, bus lanes may be designated such that an auto can only use the lane for turning; of course, the better this is enforced, the more effective such lanes would be. Curb bulbs at bus stops provide additional waiting area for riders and allow buses to stop without pulling over, eliminating any time that is wasted by buses merging back into traffic. Legally permitting rear boarding and Proof of Payment on buses will reduce dwell times, and signal preemption will minimize the time that buses spend stopped at red lights, even without the benefit of dedicated lanes.

Many of these narrow neighborhood main streets are located close to much wider streets designed for increased vehicle throughput. Although the narrow streets will not accommodate exclusive bus lanes, on the map, these wider streets have been pressed into service as natural places for dedicated bus lanes. The idea, then, is to build robust bus rapid transit — with signal priority, stations, and true bus-only lanes — on the wider streets, and to supplement these rapid corridors with improved conditions for local service on the narrow neighborhood main streets. Some riders are willing to walk a few extra blocks if the travel time is shorter; other riders would rather exchange speed for immediate access to their destination from the bus. Pairs of rapid/local lines would serve both types of riders.

On the map below, existing infrastructure for BART, Muni Metro, and Caltrain is in red; only major stations have been marked to illustrate how the BRT corridors connect to rail nodes; no surface light rail stops are marked. I also did not include the cable car and historic streetcar lines. Just for clarity, no rail expansions are marked, even in cases where rail seems like a natural choice, such as spurs off the T-Third to serve redeveloped southern waterfront neighborhoods. The only exception is that the T-Third has been extended from Sunnydale to Bayshore. Corridors that might receive full BRT treatment are marked in yellow; the narrower streets that would receive some subset of improvements are marked in green.

Here is the citywide map and a zoom-in on the northeast quadrant; click through the images for full-size versions on Flickr: 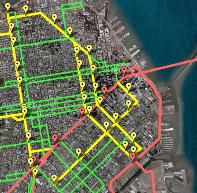 A number of the corridors identified for subway tunnels in the dream subway map have been converted to BRT in this map. However, the BRT version includes additional corridors where improvement is needed, but where ridership is too low to justify the expense of tunneling. Different styles of BRT are the right way to improve these corridors in a cost-effective way, so in some sense, the above map is a more complete indication of the corridors that should be upgraded.

For the corridors featuring exclusive right of way, possible BRT station locations are indicated, with the underlying goal of facilitating easy transfers, while striking a balance between too many and too few stations. Stations should be sufficiently frequent to make the line easily accessible, yet far enough apart to decrease travel times, and express service should be added that stops at even fewer locations. The streets featuring a full BRT implementation with true bus-only lanes draw from Muni’s own long-term vision and naturally form the skeleton of a citywide network. These streets include: Geary, Van Ness, Potrero, Folsom, Geneva, Cesar Chavez/Army, and Park Presidio/19th Avenue. Just for fun, the Central Subway has been eliminated and replaced with a BRT corridor from Caltrain to the Marina, with an additional section on Kearny Street — mirroring the 9X, 30, and 45 lines. The 9-San Bruno BRT route, which has been slightly rerouted to serve a combined Caltrain/Muni station at Bayshore, features a combination of exclusive right of way and more limited improvements, changing to accommodate the form of the street.

The dual yellow/green coloring seemed to be the clearest way to depict the fact that different corridors will necessarily receive different treatment, but the color-coding is slightly misleading, since these improvements do not necessarily fit into such an easy dichotomy. In particular, not all the green routes are of equal importance, nor would the entire section of these routes necessarily receive the same treatment across the board. A prime example is the 1-California, which has been marked in green, in part because the severe street limitations on the eastern segment of the route preclude rapid service. But ridership on the 1-California is over double that of some of the other routes marked in green, making it a better candidate for a broader range of improvements than some of the more lightly used green routes. 1L limited service could be implemented — once again, not as useful in the eastern segment where narrow Clay and Sacramento Streets preventing passing, but much better when the bus travels on the wider portion of California Street.

In the near future, I hope to post an East Bay BRT map, and possibly also a map for the South Bay.