If you haven’t gotten to it already, please read the introductory post. Also, click here for the East Bay half of the map, which has now been posted.

This first post will cover the San Francisco half of the subway dream; tomorrow’s post will address the East Bay half. In the introductory post, I stated sort of generally that this is a thought exercise in what could have been, rather than what should be, at least in terms of the modern climate for funding transit expansion. That said, some of the recommendations here are simply upgrades to existing infrastructure that should be carried out, as they provide improvement at a cost lower than that required to fashion new subway tunnels. First, the maps. The map on the left is the citywide map, while the right map is a focus on the northeast quadrant. For full-size versions of both maps, click the image, and you’ll be redirected to my Flickr account: 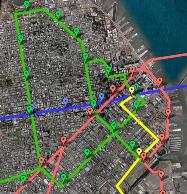 Existing BART and Muni Metro infrastructure is pictured in red; new BART infrastructure is marked in blue, and new Muni infrastructure is in green. Stations are marked with the pinmarks. Yellow represents the Caltrain corridor; here, I’ve assumed that the line has been extended beyond its current terminus at 4th/Townsend to a newly reconstructed Transbay Transit Center. Tracks would transition underground before reaching 4th/Townsend, and the current depot would be refashioned into a subway station. Trains would tunnel north underneath Second Street to reach Transbay.

As I mentioned earlier, some of the recommendations here involve upgrades to the current system. A few infill stations have been added: a Muni Metro station between Van Ness and Church, at Octavia, to serve a neighborhood that is being reborn since the freeway destruction. In addition, new stations have been added to fill in gaps on the BART line, at 20th Street/Mission and 30th Street/Mission. Balboa Park Station, which is marked in green on the citywide map, is another upgrade. This station is an important transit nexus, but connections between BART and Muni Metro are currently counterintuitive and haphazard; ideally, this would be refurbished into a more multimodal station to serve a neighborhood which is already transit-oriented, but which will hopefully be even denser and more livable in the future. Although the K-Ingleside, L-Taraval, and M-Ocean View lines are marked in red, upgrades would also be carried out on those lines: cutting out a number of intermediate stops, and eliminating or at least reducing sections in which trains are forced to operate in mixed flow with automobiles. The N-Judah, however, has its middle section marked in green. Under this subway dream, the N-Judah would remain in a subway tunnel all the way to the Outer Sunset, providing direct service to popular neighborhoods it just misses under the current configuration. After Van Ness, trains would run under Haight Street, with stops at the Lower Haight and the Upper Haight neighborhoods, before turning to serve Cole Valley, UCSF Parnassus, and the Inner Sunset (9th/Irving) — these latter three would also be underground stops. The N-Judah is very often delayed while negotiating traffic in this section of the line; relocating the tracks underground would eliminate these bottlenecks and increase reliability. Then, rather than turning onto Judah, trains would remain under Irving and stop at 19th Avenue, providing direct service to the commercial district along Irving. Trains would then resurface after 19th Avenue.

New Muni Metro infrastructure has been added to the City’s southeastern districts: a spur off the T-Third line to serve any future developments in Hunters Point, along with a direct rail connection along Geneva and through Visitacion Valley between Balboa Park and Bayshore Caltrain station (which would also receive T-Third service once the current line is extended past Sunnydale). Quite a bit of new tunneling has been added in the northeast quadrant as well. A downtown loop would enhance connections between the Financial District and the downtown-adjacent neighborhoods both north and south of Market. A new station has been added to provide direct service to Jackson Square and the north side of the Financial District, and a tunnel under Van Ness has been added to improve service in that corridor. The loop travels under Folsom Street, in anticipation of large-scale development South of Market, and would connect to the Central Subway at 4th Street (Moscone Station), and then serve a new Rincon Hill neighborhood center along Folsom before terminating at the Transbay Transit Center.

Although there’s nothing dreamy about the Central Subway, I’ve included it on this dream map in any case, since it doesn’t seem likely we can stop it, but as you see in this map, it does sort of get in the way. The fact that there will be a Stockton alignment (instead of an at least partially sensible tunnel under Kearny) forces another awkward transfer with the new Geary BART tunnel on this map. The tunnel would approach the city from the East Bay via a second transbay tube (see the upcoming East Bay map to see the possible corridors where these trains might be coming from) and stop first at the new Transbay Transit Center. Trains would then proceed under Market Street and a stop at a station near Kearny. This station would connect to Montgomery via an underground pedestrian tunnel and would also extend westward to create a forced connection to the Central Subway’s Union Square station under Stockton. (An interesting factoid: this would create quite the chain of underground pedestrian connections. A connection from Powell to Union Square is planned for the Central Subway, and under this map, Union Square would be connected to the new BART station at Kearny, which would in turn be connected to Montgomery. And Montgomery itself could be connected to the Transbay Transit Center via another pedestrian tunnel.)

The Kearny station is admittedly a halfway attempt to connect to both the Central Subway and the existing BART tunnel, while still serving Union Square. After that, trains would continue in the tunnel, serving neighborhoods along Geary: the Tenderloin, Van Ness, Japantown, the Fillmore, and the Richmond District. Stations would be placed at Jones, Van Ness (with a transfer to the Muni Metro tunnel), Fillmore, Masonic, Arguello, and Park Presidio. At this point, there would be a split. While a few trains would serve the remainder of Geary, most would turn southward, stopping at Golden Gate Park, Irving (making a connection to the new N-Judah station at 19th/Irving), Taraval (connecting to the L-Taraval), San Francisco State (connecting to the M-Ocean View), and then terminating at Daly City, or perhaps proceeding south to the Peninsula. Another possibility, not included in this map, would be to extend the 19th Avenue line north to the Presidio and the Marina as a connection for North Bay commuters — although the reason I didn’t include better service to this section of the city in general is concern about ridership.

Observant readers will notice that there are a few blanks in this map: namely, the west side of the Sunset, and the region between the BART line under Mission Street and the T-Third line. As the Third Street corridor and central waterfront become more densely developed, it will become increasingly necessary to develop strong crosstown connections between Mission Bay, Third Street, Potrero Hill, and the Mission District. The assumption here, though, is that bus rapid transit would facilitate these connections, in addition to providing improved service along the 9-San Bruno and 29-Sunset corridors. In fact, there are other opportunities for bus rapid transit which have not been marked here, but which would complement the rail network.

Check back later for the East Bay dream subway!