Time for another construction update! The last construction progress post mainly focused on buildings that were recently completed or are very near completion, so this post will cover many large projects that are not as far along yet. As usual for these posts, you can click through each picture to see a larger version. The full-sized versions are hosted on my Flickr account.

631 Folsom, a.k.a. BLŪ, is a 21-story building in Rincon Hill with narrow floor plates — just half a dozen units on each floor, for a total of 120 units, along with ground floor retail. The image on the left is the rendering, and the image on the right depicts the current state of construction:

One of the future shining beacons downtown (at least, until the Transbay Tower is built) is 301 Mission, better known as the Millennium Tower. The Millennium is a 645-foot condominium tower designed by Handel Architects, located at the northern end of the Transbay Terminal. Here are two images of this tower. The image on the left is a rendering, and on the right is a construction picture:

This picture, taken from several blocks away, shows the rising Millennium Tower beginning to take its rightful place on the skyline: 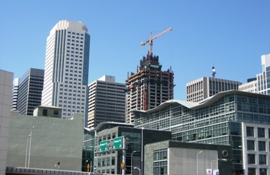 Next door to the tower will be an 125-foot (11-story) building that will have more condos. The great part of this whole project is the fact that the Millennium Tower and its much shorter neighbor are adding 419 additional homes within spitting distance of what already pretty much is, but will one day really be, the most transit-oriented location west of the Mississippi River. The bad part? We are also building four layers of underground parking (350 total parking stalls) at this transit-rich location. Here is the construction pit on the site, excavating the parking garage, which will be located under the shorter building: 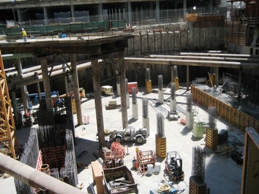 Moving a couple blocks up the street from the Millennium, 555 Mission will add 34 stories of office, along with a small retail component. The image on the left is the rendering, and the image on the right depicts the current state of construction:

Now that both 555 Mission and the Millennium are going up, a nice “canyon” is starting to develop along Mission Street: 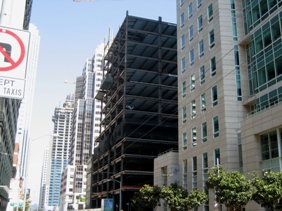 Switching gears to Civic Center, the 20-story Argenta building will add 179 units and a small street-level retail component at Polk and Market. This project serves the City’s dual purpose of revitalizing the mid-Market corridor and of increasing the height and density of structures in the immediate region of the intersection of Van Ness and Market. The leftmost image is the latest rendering, and the two images show the construction progress from two different angles:

Nearby, a 100-foot (8-story) mixed use building (with 50 units of housing, 21,200 square feet of commercial space, and additional office space), is rising at 77 Van Ness Avenue, at the corner of Fell Street: 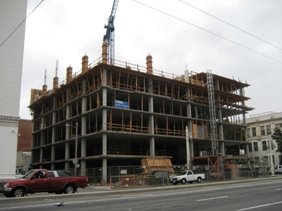 The Hayes (a.k.a. 55 Page Street) is a 128-unit residential building in Hayes Valley. Below, the leftmost image is the rendering, followed by two pictures depicting construction. The second picture, taken from Market Street, illustrates the angular “chaos” that The Hayes adds to the buildings in the area, because of the way this building is set back just behind Market but is still oriented into the regular north-of-Market street grid:

Finally, two large holes in the Tenderloin are, at long last, being filled. The first is at 990 Polk (the southeast corner of Polk and Geary) and will add housing units for seniors, though I’ve heard conflicting numbers as to the precise number of units. As of a few months ago, the City was quoting the project at 143 units, but the Tenderloin Neighborhood Development Corporation has cited the number as 110 or 160 units. In any case, there will be between 100 and 200 units. The picture on the left depicts what the building might look like, and the right picture shows the construction progress:

In addition, two new buildings will be constructed at 125 and 149 Mason, between Ellis and Eddy, in the shadow of the Hilton hotel. The larger building at 125 Mason is currently under construction: 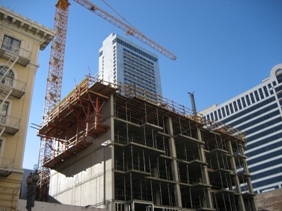 This project, carried out by Millennium Partners in conjunction with the Tenderloin Neighborhood Development Corp. and Cecil Williams and Glide Memorial, is actually the off-site affordable housing component of the Millennium Tower, and it will add 137 units of affordable housing just one block from the Powell BART/Muni station. 125 Mason will be 14 stories tall and will have 81 one- to four-bedroom apartments. The smaller building (149 Mason) will be 8 stories and will have 56 studio apartments. Because the neighborhood is so dense, lacks open space, and is more well-known for prostitution and drug dealing than for its positive attributes, it is easy to forget that the Tenderloin has one of San Francisco’s largest concentrations of children. The families who will call this building home will benefit from a courtyard and play area that are part of the complex.

Just one final note: both of these first two construction posts are quite long. Future posts in this series will probably be a bit shorter and more manageable, but I wanted to get a substantial start. More of these posts will be coming in the future, both to jumpstart new projects and to show the progress that has been made with these projects.