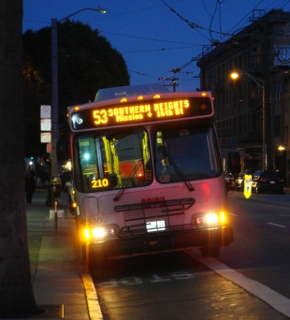 “Killing Muni Softly” is the sort of post title one would rather use at most once, preferably not at all — but certainly not as the headnote of an occasional series.  No such luck in San Francisco, where transit is caught in a death cycle that may be on course to spiral out of control.  And while the causes of that death cycle undeniably extend well beyond the City and County limit, local government continues to squirm uncomfortably, rather than do the heavy lifting that is necessary to reverse the death cycle and set San Francisco’s ailing Muni system on the road to recovery.

It is encouraging to see that the MTA Board appears to be more serious about increasing parking enforcement to help close the FY11-12 budget gap.  It is likewise encouraging that discussion about revenue-generating ballot measures has commenced.  But in spite of those preliminary positive developments, the MTA simultaneously seeks a way out — by announcing its intention to declare a fiscal emergency.  In light of the FY11-12 budget deficit, MTA projects negative working capital within the next year, which may trigger a finding of fiscal emergency.  By declaring fiscal emergency for this upcoming year, as it has done in some previous years, the MTA seeks a Section 21080.32 exemption from the California Environmental Quality Act.  This exemption allows the MTA to cut Muni service and increase fares without carrying out otherwise-required environmental review under CEQA.

The MTA Board has confirmed its plan to move forward with the 10% service cut that was already approved in conjunction with the FY10 budget.  And yet, there remain unexplored options that could mitigate this painful 10% service cut and the need to declare fiscal emergency—all while ensuring that the MTA Board pursues a more sustainable path in the future.  Assumed in the FY10 year-end budget is that the Transportation Authority will approve a $7 million Proposition K allocation—in spite of the fact that certain Supervisors have indicated their distrust of MTA’s fiscal management.  Instead, MTA could investigate a larger request upfront, so that the amount in excess of $7 million could be used to offset some or all of the $4.8 million saved in this fiscal year from the service cuts.  But instead of having that money simply get sucked into a budgetary black hole, the allocation could be characterized as a loan, conditioned on eventual repayment with funds obtained through new revenue streams.  Meanwhile, SPUR’s budget proposal could be incorporated into the more robust budget fix needed for next fiscal year, covering deficits and obviating the need to declare fiscal emergency.  This strategy would, in turn, give the MTA Board an opportunity to pursue additional revenue streams, both to repay the loan and simply to operate the system in the coming years.  Exploring options of this nature would demonstrate, both to riders and to the Board of Supervisors, that the MTA Board is committed to balancing agency books in a way that looks out for Muni riders, rather than disenfranchising them.

The State has continually retreated from its transit funding obligations, raiding transit to close state budget deficits — this is hardly news.  One might have guessed even a couple years ago that State Transit Assistance funds would eventually be wholly eliminated.  At the very least, the trend indicated that the State would repeatedly dip into transit funding.  But where the federal government does not fund operations, and where the State has ceased to do so, it necessarily falls to local government to make up this difference.  During the period in which the State was withdrawing operations funds, the MTA did not diligently develop new revenue sources.  It did not plan for tough times.

In other words, the upcoming fiscal emergency is neither surprising nor unexpected.  It is certainly not the MTA’s fault that the State raided funds that rightfully belonged to transit agencies.  But the City Charter affirmatively obligates the MTA to do exactly that which the MTA has failed to do — mitigate an unfortunate situation by diligently pursuing funds needed to preserve service:

Charter, Section 8A.109(b): The Mayor, the Board of Supervisors, and the [Municipal Transportation] Agency diligently shall seek to develop new sources of funding for the Agency’s operations, including sources of funding dedicated to the support of such operations, which can be used to supplement or replace that portion of the Municipal Transportation Fund consisting of appropriations from the General Fund of the City and County. . . .

What we have seen, since the approval of the 10% service cut, is a perversion of the transit-first policy laid out in the Charter.  The current climate is one that places significant hurdles blocking the addition of transit service, while freely permitting the deletion of service.  The Transit Effectiveness Project, which aimed to strategically reallocate service and increase investment in core transit corridors, has stalled — but the TEP has provided a treasure trove of data informing what routes could be eliminated.  In other words, the portions of the TEP that proposed to boost service have been put on hold until after environmental review is complete.  But the portions of the TEP that proposed to eliminate service have already been partially implemented — without any environmental review, of course, courtesy of the previously declared fiscal emergency.

Much of the ongoing budget discussion at the Board suffers from a critical defect: it merely draws on existing tools, including service cuts and fare hikes.  Then, when those tools obviously and completely foreseeably fail to balance the budget, the Board essentially throws its hands into the air and readies MTA for yet another fiscal emergency.  To accomplish … what, exactly?  To facilitate the unimpeded decimation of yet more critical lifeline service, after having just signed off on a 10% system-wide cut that relegates many routes to sparse, quasi-suburban headways?  Yes, to their credit, both Nat Ford and the Board expressly disapproved of any further cut to service.  But both also allowed the 10% service cut to be implemented in the first place, without aggressively pursuing other options.  Neither Nat Ford nor the Board ultimately regarded this deep service cut as it should have been regarded — a last resort.  And so, in spite of recent discussion about parking and ballot measures, a new declaration of fiscal emergency for this upcoming fiscal year once again places in the hands of the Board a mechanism by which to desert the transit-first policy.  That has, after all, been a principal use of the fiscal emergency declaration.  The path to unsustainability would be left open and clear, should a new budget deficit come to light in the future — or should the Board decide once again to sidestep implementation of politically controversial budget solutions.

Dedicated sources of revenue are clearly needed to maintain a viable transit system into the future.  The Charter mandates that the MTA carry out the financial planning needed to ensure the succcessful operation of the robust transit system that San Francisco both requires and deserves.  But on some level, the intent to move forward with a declaration of fiscal emergency suggests that, in the Board’s view, there is something acceptable or inevitable about the status quo approach.  The challenge posed by upcoming budgets will not be met if there is only a weak commitment to think creatively and do the hard work that needs to be done.