UPDATE (7 September 2009): The reopening of the Bay Bridge is postponed to Wednesday, September 9 at 5:00 a.m. Please use transit alternatives to get to work on Tuesday.

Construction on the Bay Bridge has made swift progress this weekend with the swapping-in of the detour tie-in, a 3600-ton section of double-decker roadway inserted into the half-mile detour at Yerba Buena Island. The detour section of roadway, which curves south of the original bridge alignment, will be pressed into service for the next four-or-so years until the new eastern span is completed. The prefabricated curved section of roadway has been slid precisely into place within a one-half inch of tolerance, and the joints have been installed. Since then, crews have been finishing the rest of the work needed to make the new road a functioning freeway, including striping, utility work, and barrier rails. This part of the project is still on schedule to be completed by Tuesday, September 8, at 5:00 a.m. 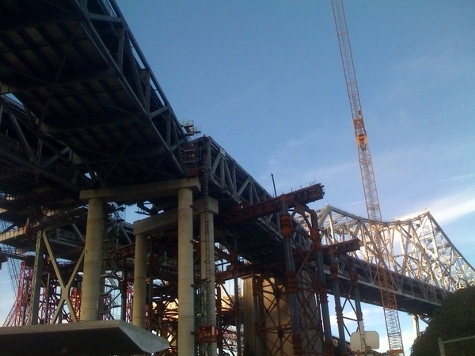 The detour tie-in, just prior to insertion. Courtesy of Caltrans/BayBridgeInfo.

Meanwhile, the design stage is complete and repairs are underway for the crack discovered during an inspection yesterday on the span, east of the Yerba Buena Island construction site. Although the crack was previously reported as digging about halfway into the two-inch eyebar, tonight’s video update from Caltrans includes a correction stating that the crack, which is visible from 120 feet below, is actually six inches long with a one-half inch width. The crack is believed to be unrelated to the roadway swap work carried out this weekend, because 3-6 months of rust have accumulated — implying that the crack first appeared well before this weekend, and well after the Bay Bridge’s last inspection during the 2007 closure.

Despite the fact that this is a holiday weekend, all materials necessary to complete fix the crack have been transported to the Bay Bridge site, including steel from Stinger Welding flown in from Arizona. Work is underway, and the bridge will remain closed until the crack is repaired. Caltrans cannot yet commit to finishing the crack repairs (and thus reopening the Bay Bridge) by Tuesday at 5:00 a.m., but will announce Monday whether or not the reopening will have to be pushed beyond Tuesday.

And finally, BART has reported that on September 5, it experienced the second-highest Saturday ridership in its history: 244,400 riders, with 136,600 of those being transbay trips. The only time BART had more riders on a Saturday was during the 2007 bridge closure.