UPDATE (6 September 2009): The repair work for the eyebar crack is underway.

Construction work on the Bay Bridge east span proceeded according to schedule today as construction crews carried out the impressive feat of swapping in a new section of roadway for the Bay Bridge east span, sliding into place a 3600-ton double-decker section of the detour, which will curve the path of the bridge just south of the old alignment. The closure of the bridge presented an excellent opportunity to carry out an inspection, as had also been done when the bridge was last closed in 2007. That inspection revealed a cracked eyebar on a separate section of the east span, pictured below: 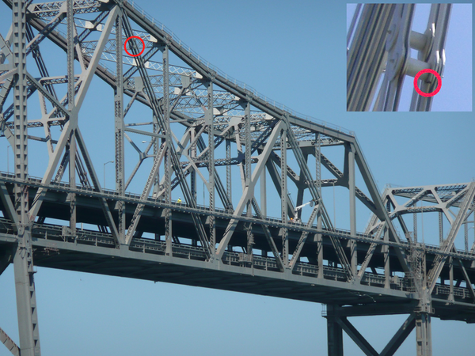 Caltrans determined that the two-inch eyebar was cracked through about halfway, and declared the problem to be “significant enough to have closed the bridge on its own.” Crews are now undergoing emergency repair of the crack, and the bridge will not be reopen until both the repairs and the planned detour construction are complete. While the planned work at Yerba Buena Island is on schedule to be completed by the planning reopening time (5:00 a.m. on Tuesday, September 8), also finishing the emergency repairs on the crack by Tuesday would be a “monumental effort,” and thus may require postponing the reopening beyond Tuesday. It’s not yet clear when the bridge will be reopened; in the meantime, ongoing updates are being posted on BayBridgeInfo.org.