There are some exciting construction projects rising in downtown Oakland these days, since many of the projects that were initially proposed in response to Jerry Brown’s 10K downtown revitalization plan are finally emerging from the planning process and becoming a reality. This post will attempt to cover some of the more high profile downtown projects, and a couple smaller ones as well. As usual, full sized versions of all these images are hosted on my Flickr account, so just click through any image for the larger version.

Where else could I start this post but with Uptown? For many years, the City of Oakland has been trying to redevelop this substantial chunk of land, a triangular region bounded by Telegraph and San Pablo, located south of 20th Street and north of City Center — but the area stubbornly resisted any sort of development. In some sense, both the trials and successes of downtown Oakland’s revitalization are reflected in the ebb and flow of Uptown; downtown can never be fully revitalized unless Uptown is vibrant. The city went through a few different plans for Uptown at different times — including, at one point, a possible new ballpark for the Oakland A’s — but ended up settling on a mixed-use development, a choice that is well-suited to this highly transit-oriented location, just steps from the 19th Street BART station and a slew of bus lines. Given the excellent location, I would have preferred to see a much denser development than the one which is being constructed, but it is actually a relief to see that this chunk of land, downtown’s largest hole, is at long last being given new life.

The Uptown project, carried out by Forest City, will be built in phases. The first phase consists of 9,000 square feet of retail and 665 rental units in a few low- to mid-rise buildings. Check out the website for a rendering, and here are a few photos, taken from different corners of the project site, depicting the current state of construction:

100 Grand Avenue, at the corner of Webster, will be a new high-rise addition to the Valdez section of downtown, just a few blocks from the large Uptown development. The structure will have a few terraced heights to reduce bulk, but it will include a 22-story tower and will add 238 rental units and 5,415 square feet of retail space to the emerging Uptown area. The left image below is a photo of the poster rendering hanging at the construction site, and the right picture shows the construction:

Left image is a photo of a rendering from Essex Property Trust. 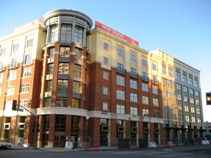 The next project, nine-story 2100 Franklin, is downtown Oakland’s first office construction since 555 City Center was completed in 2002. The building is connected to existing the 2101 Webster building, and the two buildings together form “Center 21”. 2100 Franklin has a long, narrow shape because of the constraints of the site. The curved blue glass shows distorted reflections of nearby buildings on Lake Merritt:

The Ellington, rising on Broadway between 2nd and 3rd Streets, will add 134 units and 11,197 square feet of retail to the Jack London Square area. The developers of this project, Molasky Pacific, are also planning another high-rise next to 100 Grand. The left image below is the rendering:

There are also a few projects being constructed in Old Oakland/City Center area. 901 Jefferson is a 75-unit mixed use building. The left image is a rendering, and the right image depicts the current state of construction: 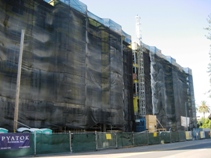 Right next to 901 Jefferson is Market Square, a two-phased project that adds 202 housing units in the block bounded by Clay, Jefferson, 8th, and 9th Streets. The first phase was completed some time ago, but the second phase of construction is nearing completion. Some variation in color and features helps to mitigate the monotony that is often a problem in these “master planned” developments:

The 7-story City Walk project would add 252 units of housing to the T-10 block of City Center, in the shadow of the Federal Building twin towers,

but a few weeks ago, the Business Times reported that Olson Company, City Walk’s developer, has placed a construction freeze on the project.

Although these construction progress reports tend to focus on housing and office construction, I must mention two major cultural buildings set to open downtown in the next couple of years. One of these buildings is the Cathedral of Christ the Light, a basket-shaped structure rising on the shores of Lake Merritt, in front of the Ordway Building at the corner of Grand and Harrison. Saint Francis de Sales, a building dating from 1893, formerly served as the cathedral for the Oakland Diocese, until that structure was damaged in the 1989 Loma Prieta earthquake. The church was subsequently demolished, because the diocese could not afford to restore the structure and carry out the necessary seismic updates. The Cathedral of Christ the Light, currently under construction, is the replacement cathedral: 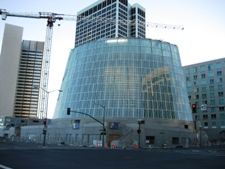 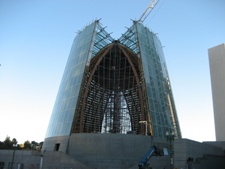 When I first saw renderings of this cathedral, I was pleased to see that a more contemporary structure would soon be gracing the shores of Lake Merritt, the curve of the building a nice foil to the nearby Kaiser Center. I was equally excited to finally see the last of that parking lot in front of Ordway. Now that the building is going up, though, I’m not quite as convinced. Perhaps its magic can only be unlocked upon completion. An office or residential tower might have been more appropriate for this location, but this cathedral will be an interesting addition.

The second cultural building to mention here is the landmark Fox Theater. Originally opened in 1929, this theater has been dormant since 1963, but it is finally set to reopen, hopefully next year. The theater is in the process of being restored to its former glory:

The theater building will also house the Oakland School for the Arts. In addition, a new building (Fox Courts) with 80 units of affordable housing and 4,800 square feet of retail will be built behind the theater. Here is a rendering of that project:

It is nothing short of criminal that this gorgeous theater has sat unused for decades, but we are lucky that it has not suffered the fate of so many other old theaters, i.e. demolition. When it reopens, this jewel of the Uptown District will fill a crucial hole and add a new touch of vitality to the neighborhood.