This week, the San Francisco Municipal Transportation Agency officially launches SFpark, a program that implements the type of demand-based pricing scheme advocated by Donald Shoup.  Through SFpark, both on-street and off-street supply in designated pilot areas, which include many of San Francisco’s busiest neighborhoods, will be priced dynamically to match demand.  SFpark’s pricing strategies are designed to make off-street structures more attractive to drivers, while encouraging high turnover of on-street parking spaces so that at least one space is available per block.  Although this will increase the price of parking during times of peak demand, SFpark will improve access to merchants for motorists and minimize driver frustration by ensuring that some nearby parking is available to those who are willing to pay the premium for using street real estate to store their vehicles during a busy time of day.  It will also improve access to merchants and the overall transit experience for those of us who do not drive.  By ensuring that at least some on-street parking is unoccupied, SFpark will ideally improve travel times for surface transit — by reducing the significant and non-productive traffic generated by drivers who aimlessly circle city blocks hunting for a parking space. 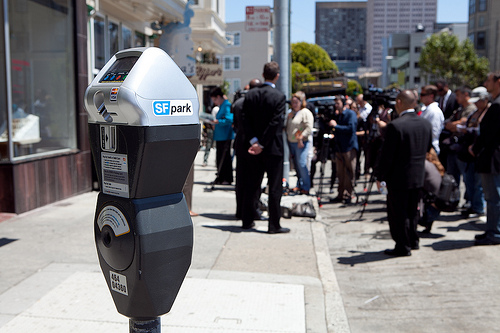 Although programs like SFpark demonstrate progress and provide valuable case studies, opportunities abound to improve parking management in both major cities and suburbs throughout the United States.  But parking is also a touchy and controversial topic; proposals to increase parking fees are generally not greeted warmly and can be vociferously protested.

One barrier to implementing effective parking policy is the context in which government officials propose changes to parking fees.  Particularly during the recession, municipalities have been strapped for cash and seek to increase parking fees as a means of generating revenue to help balance the budget.  The result is that the sound policy reasons to raise the price of parking become drowned out by loud opposition from members of the public, who claim to be victims of an unfair budget that is balanced on the backs of citizens.  Cities that wait until a budget crisis knocks at their door to increase the price of parking are not doing themselves a favor because the underlying motivation for the adjustment will be transparent.  Moreover, the substance of the changes that are proposed may also reveal that underlying motivation, in that they involve simplistic blanket fee hikes — rather than a truly dynamic, market-based approach where the price of a particular parking spot changes with demand.  In short, it becomes all too clear that the purpose of the higher parking fees is not to enact sound policy, but to generate revenue.  When a city tries to do the right thing for the “wrong” reason — to the extent that increasing parking fees to avoid cutting municipal services can be deemed “wrong” — it makes it all the more difficult to try it again later for the right reason. 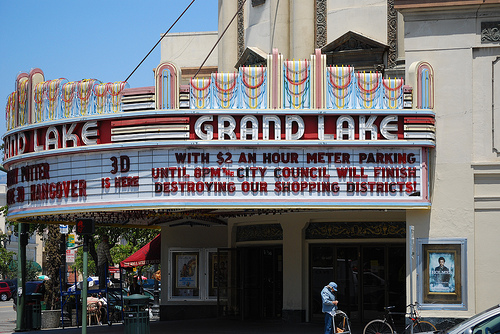 The marquee of the Grand Lake Theater in Oakland, which proudly displays progressive political messages, adopted a conservative stance on parking in 2009 -- an all-too-common knee-jerk reaction among many merchants. Image: courtesy of Fragmentary Evidence.

Another barrier to implementing effective parking policy is the perception that higher parking fees diminish a city’s competitiveness, as compared to nearby cities, by making it more difficult for merchants to attract customers.  This point emerged during the backlash in 2009, when the Oakland City Council considered higher fees and extended meter hours as one measure to address the city’s budget deficit.  The underlying assumption here is that the cost of parking is a significant, perhaps even the predominant, factor at play when someone is deciding where to eat dinner, see a movie, or go shopping.  And while this concern was perhaps an especially sensitive point in Oakland because of retail leakage, it overlooks several more important considerations, including: (1) that most people probably won’t travel long distances just to find cheaper parking, particularly when paying more for gas eliminates any potential savings; (2) that the increase in parking price is often minimal compared to the cost of a meal or movie; (3) that many customers seek a unique merchant, neighborhood, or experience that cannot be replicated elsewhere; and (4) that increasing the cost of parking does not necessarily make the city or neighborhood a less compelling destination, but rather, provides an incentive for customers to use transit to travel to neighborhoods they would otherwise access by car.

There are many reasons to question the assertion that higher parking fees make a city less competitive.  But whether or not this is true in fact, the mere existence of this perception suggests that rational parking reform will be an uphill battle — one in which common arguments opposing higher fees will be aired again and again, in city after city.  It is this situation that helps frame the role that regional governments can play in the conversation about parking.

A Role for Regional Participation

Involving regional entities in parking management may, at first glance, seem like a strange idea.  Traditionally, parking management has been left to cities.  Cities control how streets are used within their respective jurisdictions, and they retain the power to charge (or not) for public parking.  In California, regional entities like metropolitan planning organizations (MPOs) cannot simply swoop in and force a city to change its parking policies.

And yet the above discussion suggests that a regional directive on parking could be beneficial.  An MPO can provide valuable direction by identifying best practices, assembling useful case studies, and establishing a policy framework that explains and justifies the benefits of parking demand management.  This readily available resource would provide cities with a more constructive way to frame the public discussion about parking, while educating citizens that parking reform has benefits beyond providing the city with more revenue.  Establishing a regional consensus on parking demand management could also help eliminate the popular perception that increasing the price of parking makes a city a less desirable place to do business when compared to nearby cities that retain low parking fees.  Geographically proximate cities, perhaps with the assistance of the MPO, could cooperate in developing harmonious parking policies.

MPOs can provide grants to cities that demonstrate interest in implementing smart parking demand management strategies, and in this respect, there is a useful precedent.  The Metropolitan Transportation Commission (MTC) in the Bay Area has been able to take advantage of its control over funding to leverage improvements in land use — particularly in terms of planning transit-oriented development within walking distance of stations planned along new transit extensions.  Land use, like parking, is firmly within the dominion of local control.  And yet regional influence over land use is possible, despite the fact that MPOs like MTC have no statutory authority to make land use approval decisions.

A similar approach could be taken for parking reform, in which a regional policy directive both guides local planning efforts and provides the funding incentive needed to get the job done.  MTC has taken tentative initial steps to investigate what role regional governments should play in the parking arena, and in the future, I hope to discuss in more detail ways to improve regional oversight of parking.

Senate Bill 375 provides metropolitan regions in California with a compelling reason to do so now.  Parking — whether it is abundant or scarce, cheap or expensive — has tremendous influence on shaping travel choices.  Parking demand management could be an effective way to reduce greenhouse gas emissions, both by (1) encouraging drivers to switch to transit, particularly for peak hour trips, and (2) reducing the emissions associated with drivers circling city blocks on the hunt for parking.  Rational parking policies, when combined with smart land use decisions, are a powerful tool for reducing vehicle miles traveled, and, in turn, for achieving SB 375’s regional emissions reductions targets.  One of the core lessons we take away from the Initial Vision Scenario prepared by MTC and ABAG for the Bay Area is that compact growth alone is not sufficient.  The Sustainable Communities Strategy will need to incorporate additional techniques in order to achieve the target.  A strong regional consensus on parking policy, coupled with robust implementation at the local level, could be just such a technique.

5 thoughts on “Could parking policy benefit from more regional oversight?”