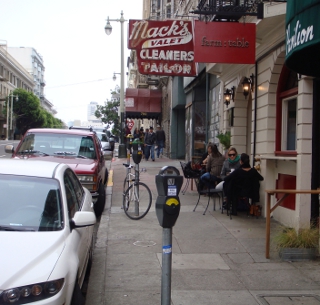 This Wednesday, December 15, 2010, the Department of Public Works (DPW) will hold a hearing (PDF) to gather public comment on two parklets — extensions of the sidewalk built in parking spots to make space for outdoor seating — that have been proposed in San Francisco.  One parklet would be installed on Post Street between Jones and Leavenworth, in front of farm:table, a popular cafe whose miniscule premises consist of just a common table and a few sidewalk seats.  The other parklet would be installed on Valencia Street between 21st and Hill, in front of Ritual Coffee Roasters, an establishment whose interest in parklets is not surprising in light of demonstrated enthusiasm for both Park(ing) Day and Sunday Streets.

Of these two proposals, I am particularly excited about the Post Street parklet, in part because it’s in my own neighborhood — but also because this area is one of the densest quarters in the country outside of New York, and yet there is a lack of public open space to serve the dense population.  The neighborhood has largely been overlooked, even as livable streets-oriented upgrades have been installed in other parts of town.  Even a sliver of new community gathering space in the form of a parklet would be a welcome addition to this neighborhood.

That said, both parklets deserve your support.  If you happen to be available at the time, please drop by the hearing (Wed. Dec. 15 at 9:00 am, Room 400 in City Hall) to speak in favor of the proposals.  Or if you can’t attend in person, comments can be emailed to nick [dot] elsner [at] sfdpw [dot] org – directed to Nick Elsner at DPW.

« Proposition 26, and its implications for transportation funding (Part 1)
New parking controls in the works for South of Market and Mission Bay »