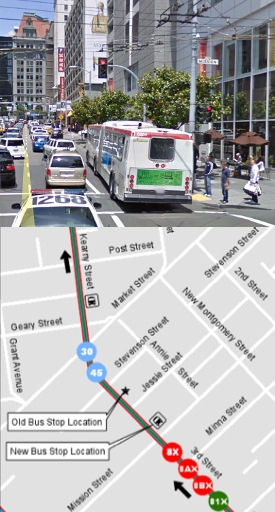 Yesterday, the Appeal published a weekend Muni update mentioning a permanent bus stop relocation that will go into effect starting this weekend.  The update is ostensibly sourced from the SFMTA, although the agency’s official transit updates page lacks any mention of this particular item.  The bus stop at issue — served by the 8X, 30, and 45 routes bound for Chinatown — is the 3rd/Market stop, located on 3rd just south of Market, between Stevenson and Jessie.  Although the bus stop is heavily used — it’s about as busy as an average BART station — stop relocation and associated traffic changes were slipped into the consent calendar of an MTA meeting about one year ago, where it was given only cursory consideration by the MTA Board.

The MTA plans to make the following changes.  The bus stop will be moved south of its current location, to the north corner of 3rd and Mission streets; and the lanes of 3rd between Market and Mission will be restriped.  A new right-turn lane will be established on 3rd just south of Market, marking where motorists should turn eastbound onto Market.  The transit-only zone north of the relocated bus stop will be eliminated — so buses departing from the new 3rd/Mission stop would have to merge into the next lane over.  That lane will be widened, giving buses more room to maneuver when 3rd Street angles northward toward Kearny.

The rationale for this new layout is to minimize collisions between cars and buses on 3rd, just south of the intersection with Market Street.  The redesign also benefits motorists to the extent it improves the flow of traffic on 3rd, but there are impacts to transit riders.  There is of course the issue of removing a necessary, albeit unenforced, transit-only lane on this heavily trafficked thoroughfare.  But there is also the issue of shifting the bus stop south, which takes what is currently a very useful bus stop and makes it less useful.

Third/Market is a major transfer point, as many riders either disembark at this stop to transfer to one of the many Market Street lines, or they board here to transfer to a Chinatown line.  MTA data indicates the relative popularity of 3rd/Market and adjacent stops:

The new 3rd/Mission stop would likely be busier than 3rd/Howard, and some riders will surely find the new 3rd/Mission stop to be more convenient.  All the same, the relocated stop lacks the same wealth of immediate transfer opportunities that are available at Market Street, and it seems strange on its face to move a stop that riders clearly find tremendously convenient, based on the data.

The Kearny/Geary stop is also very convenient to those transfer opportunities, and it basically functions as a second Market Street stop.  Riders boarding the Chinatown buses have naturally distributed themselves between the 3rd/Market and Kearny/Geary bus stops — and even with that redundancy, both stops can become quite crowded.  However, once the 3rd/Market stop is relocated, Kearny/Geary will be the only stop on the Chinatown line immediately convenient to Market Street.  The data shows that about 10,000 riders board or disembark at these stops each day.  That’s serious passenger volume for just one bus stop — and while it’s true that not every single 3rd/Market rider will elect to switch to the Kearny/Geary stop, many or most likely will.  Removing the two-stop redundancy could lead to further overcrowding and extended dwell at the Kearny/Geary stop, particularly at peak travel times.

If the issue really is primarily about safety and minimizing collisions between cars and buses at the intersection, then isn’t the better solution here not to create a wider mixed-flow lane, but to (1) maintain and actually enforce the transit-only lane, for a change, and (2) restrict right turns?  Perhaps the primary objective of the SFCTA’s Better Market Street plan is to remove at least some cars from inner Market, thereby improving the performance of surface transit.  Just how is that objective furthered by adding a dedicated right-turn lane on 3rd?  In fact, is it not an express goal of the Better Market Street plan to make this very route — 3rd Street to Kearny — a straight cross-through street, by prohibiting right turns from 3rd onto Market?  So why should we now invite motorists to make that very turn?

SFMTA, allow me to introduce you to the SFCTA.  You may want to get acquainted — or at least each acknowledge that the other exists.