AC Transit prepares for its next round of service cuts 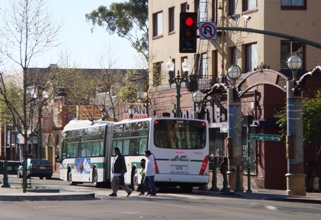 Even while AC Transit moves forward to piece together needed approvals for the locally preferred alternative of its planned bus rapid transit route — last week, the Oakland City Council unanimously approved the LPA, and the Berkeley City Council is expected to issue its decision this week — the agency is already gearing up for a fresh set of serious service cuts, fast on the heels of the service changes that went into effect in March 2010.  Those changes, while not uniformly loved, nonetheless restructured operations in generally useful ways to minimize the impact to local service, and in particular, to the most popular trunk routes.  Given the size of the overall service cut — 7.74% — it is remarkable that local service was preserved to the extent it was, with even some new service added.

But AC Transit had originally planned to execute a 15% system-wide service cut.  In a revision to its original service adjustment plan, AC Transit temporarily “restored” many of those proposed cuts while undergoing negotiations concerning funding for the BRT project.  So the District must now go back to the chopping block to eliminate 182,000 platform hours of service each year, in order to save about $11.5 million.  If these reductions are implemented as planned, the resulting level of service would be the lowest that AC Transit has provided in a generation.  Indeed, the proposals that are now on the table are all too reminiscent of the significant service cuts that AC Transit made in the 1990s.

AC Transit will not make all these reductions, nor will it necessarily adopt one strategy to the exclusion of the others.  Rather, service planners have indicated that there is considerable flexibility in selecting the specific proposals that move forward in this process, as long as the necessary savings are realized.  Strategic, fine-grained analysis informed by public commentary and real data will be necessary to make the right combination of changes that minimize hardship to riders.

Nonetheless, depending on the proposals that are ultimately adopted, the service changes will make life more difficult for those who depend on transit, particularly those who rely on off-peak and owl service to get to work.  It will be all the more difficult to live in the East Bay without a car.

The proposed reductions to weekend service (strategy #1) and night-time service (strategy #2) hit especially hard.  Minor lines might be considerably less productive than trunk routes, but they are lifelines for those that they serve.  They are important to the success of an urban transit system because they fill out the grid and connect to trunk routes. At the same time, though, it also makes sense to isolate trunk routes from serious cuts, in order to diminish the overall impact and ensure that robust services remain successful.  It’s a delicate balancing act.  Still, given that completely depriving swathes of the inner East Bay of all-night transit service — including important corridors like Broadway, San Pablo Avenue, and MacArthur — is so serious a proposition, it may make sense to instead spread the pain, by judiciously reducing other off-peak service to a level commensurate with demonstrated demand.

The system-wide proportionate reductions (strategy #3) generally either reduce frequency, or narrow the time span of operation of various lines.  A few lines would run on weekdays only, and a handful could be eliminated altogether, including new service that was introduced in the package of March 2010 changes.  There would, however, only be minor changes to Transbay service, since the Transbay lines already suffered an almost 17% cut in the last round.

Given that so many routes have already been redrawn recently, not many map changes are proposed.  The most significant restructuring of routes could occur in Oakland, in part by splitting service on the planned BRT corridor (Telegraph/East 14th Street).  One proposal realigns line 40 service back to Telegraph Avenue and isolates the 1/1R to its most productive segment (East 14th Street, between downtown Oakland and San Leandro).  The 1R would retreat to San Leandro BART, thus abandoning the southernmost segment of the route; only the 1 would run all the way to Bayfair.  Another proposal discontinues parallel service south of 73rd Avenue.  A new line 90 would operate between Eastmont and San Leandro BART via Bancroft, but the southern termini of both the 40 and the NL would retreat to Eastmont.

It bears repeating that AC Transit will not be making all of the above changes.  But the agency must now determine which changes will have the least adverse impact to riders, while still making the necessary reduction of 182,000 platform hours.  Regular riders are strongly encouraged to stay on top of this process and offer commentary, so that AC Transit is armed with the information it needs to make wise changes.  The schedule for putting these changes into effect will be relatively fast-paced.  A public hearing will be held in just one month, on May 26, and the service changes are planned to go into effect on August 22, 2010.

« It was the best of times, it was the worst of times
“It would be a circus” »