This is the 3rd post in a series of posts on the crisis facing the Sacramento-San Joaquin River Delta. It has been a few months since posting the first two installments, but it’s my intention to start it up again. Click here to see a list of all posts in the series and to refresh on the older posts.

Since the year 1900, 166 levees in the Delta and nearby Suisin Marsh have failed (with a number of islands flooding repeatedly), thereby putting at risk the agricultural and other land uses that these levees protect. As I suggested in a previous post, the piecemeal response method we have adopted to protect Delta islands has been an expensive affair — curing the most recent failures, which culminated in the 2004 breach at Jones Tract, has cost hundreds of millions of dollars. But this method is ultimately unsustainable. Indeed, under current practices, 140 more levees are projected to fail in the next century, which is only a slight improvement over the failure rate of the last century. And yet, despite the long string of levee failures over the past century, the failures that are the greatest cause for concern are those that have not yet occurred — in particular, those breaches that will be induced by the next major earthquake that will inevitably strike the Bay Area in the future.

The second half of the 19th century was a rather seismically active period in the Bay Area. There was a series of earthquakes with magnitude in the 6.0-7.0 range. Particularly noteworthy was the 1868 quake (magnitude 6.9), and of course the great 1906 quake (magnitude 7.8). But seismic activity in the Bay-Delta region has been remarkably quiet in the past century. As a result, little local empirical information is available on how earthquakes might affect the Delta’s levees (though there are certainly valuable case studies from abroad, including the 1995 Great Hanshin earthquake in Kobe, Japan). A great deal of the Delta had been reclaimed in the half-century leading up to the 1906 earthquake, so there were already levees in 1906 — but the construction of levees is an ongoing process. Since the islands have subsided further below sea level, the levees have accordingly been built taller over time. These physical changes in the levees mean we cannot really use 1906 exclusively as a model of what could occur in a future earthquake. The 1989 Loma Prieta earthquake damaged levees in Moss Landing (near Watsonville), but its epicenter was too far from the Delta to cause noticeable damage there. In its modeling, the Department of Water Resources (DWR) considered other recent earthquakes — in particular, Livermore (1980) and Morgan Hill (1984), which were the strongest quakes near the Delta in recent history. But those quakes did not cause damage in the Delta either. In other words, the Delta levees have failed 166 times since 1900, for a variety of reasons — but not because of earthquakes.

This news, of course, gives us no reason to rejoice: the levees have historically not been damaged by earthquakes, but that in no way assures us that they will be spared in future earthquakes. What it does mean is that DWR, in carrying out seismic studies, cannot really inform its modeling analysis with local historical data. The fact that the Bay Area earthquakes of the past century have not been sufficiently strong or sufficiently close to the Delta to damage the levees does provide some concrete data points. But these data points merely help clarify which types of earthquakes will probably not be a cause for concern. Determining which earthquakes are a cause for concern requires more analysis.

The Risk of Seismic Activity

The levees in the Delta and Suisun Marsh can be organized into 24 “vulnerability classes” (VCs) — two VCs for Suisun Marsh, and the remaining 22 VCs for the Delta. The zones that belong to a particular VC are so grouped because it is about equally probable that the levees in those zones would fail if they were struck by the same seismic event. The VCs are basically defined as combinations of certain physical characteristics of the levees: the thickness of peat deposits, levee geometry (especially the slope of the levee’s waterside), and potential for liquefaction. Please observe that this classification is not simply a matter of dividing the Delta region into geographic sections, because the VCs are not defined in terms of physical location. Two zones on opposite sides of the Delta may be geographically distant from each other — but if they are determined to be equally vulnerable when struck by a particular earthquake, then they would fall in the same VC.

Let’s step back for a moment and clarify what we mean by “particular earthquake.” The physical quantity that we want here is peak ground acceleration (PGA). The first thing to realize about PGA is that it is not the same as the earthquake’s magnitude on the Richter scale. When studying levees, we are less interested in the quake’s overall magnitude; rather, we are more interested in the intensity of motion at the specific location of the levee. PGA, which varies throughout the geographic region that is affected by a seismic event, measures the peak acceleration of particles in a more confined geographic area. PGA is often expressed as a fraction of g, which is the acceleration due to gravity. So, if an earthquake generates a PGA of 0.5g in a particular area, that means that particles in that area, in response to the seismic event, are accelerating at a rate that is half of just dropping the particle in free fall through the air. PGA is used in earthquake engineering, in that you might design a building to withstand a certain PGA. 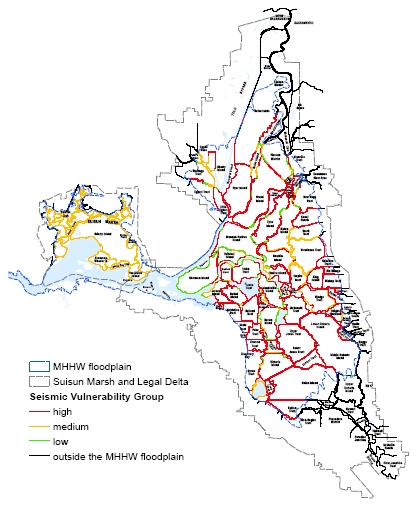 A seismic event comparable to the 1906 quake (magnitude ~8.0 on the San Andreas fault) was also simulated. That simulation yielded a higher PGA of 0.11g on Sherman Island in the western Delta. Thus, the model predicts that if the 1906 quake were to strike today, the Delta would only experience moderate damage (levees deformed up to 3 feet). There would be up to 23% probability of levee failure — although the exact percentage for a particular levee would depend on which VC that levee fell into. This means that most of the Delta’s levees would be on the lower end of the vulnerability spectrum. Given the severity of the 1906 quake, this does not seem too bad. It’s certainly a rosier scenario than that portrayed above.

But this result could change drastically for a differently situated earthquake, and unfortunately, not all scenarios are quite as rosy. A PGA of 0.3g sounds high, as compared to the 0.11g that the 1906 was simulated to generate in the Delta. However, in the case of the 1995 Kobe earthquake (magnitude 6.8), a PGA of at least 0.5g was recorded right at the levees, and the damage was more severe; the levees were deformed 15 feet, as compared to the 3 feet in the 1906 quake/Delta simulation. If a PGA of at least 0.5g were recorded in the Delta, there would probably be at least 10 feet of levee deformation. And the probability of levee failure in that case? A highly vulnerable 70-100% — the levees would most likely fail.

According to the U.S. Geological Survey, there is a 62% chance that an earthquake of magnitude 6.7 or greater will hit the Delta between 2003 and 2032. An earthquake of that intensity could cause multiple islands to fail; there is a 40% chance that between 2005 and 2030, at least one-third of the Delta’s roughly 70 islands could fail simultaneously. Merely repairing that damage would probably take four or five years (and a few billion dollars) to complete. But that does not take into account the loss of human life or wildlife — nor does it take into account a lengthy disruption of freshwater exports that would occur once the Delta islands are breached and flooded over. The subsequent ripple effect that disruption of exports would have on California’s agriculture and economy could cost the state an additional $20-$40 billion (with a B). The Delta is a ticking time bomb, in the truest sense of the word. For however grave these impacts might be, the potential for damage will only intensify until a significant earthquake strikes.

The 20th century witnessed a long series of breached levees; as we know, those breaches were not seismically induced. And so, although the Bay Area’s next big earthquake is certainly a major cause of concern, it is not the only cause of concern. The risk to the Delta posed by an earthquake has received its fair share of attention, in part because it is an unknown quantity — but mostly because levee breaches induced by earthquakes abroad have tended to be the most severe.  Earthquakes abroad have caused levee damage that extends for the better part of a  mile, or sometimes even more than one mile, while floods have generally caused less extensive damage. Yet floods are also an important piece of the puzzle, and the levees can again be organized into vulnerability classes for flooding, similar to what we discussed above for earthquakes.

Although floods and earthquakes are the two major natural causes of levee failure, the levees are fragile enough that they sometimes fail under other, seemingly more innocent circumstances. “Sunny day” events, as they are known — usually a weakened levee foundation, caused by water seepage or even animals digging underground — can also trigger a breach. In other words, a catastrophic event is not needed. The levees can — and do — fail at basically any time. The 2004 breach of the Jones Tract levee (which, by the way, has been leaking again, as of early 2009), was one example of a sunny-day event. Using the historical record, DWR has estimated that Delta levees fail once every 10 years because of a sunny-day event trigger. In the Suisun Marsh, a sunny-day levee failure occurs once every 25 years.

Earthquakes, combined with floods, high winds, and sunny-day events, all pose risks to the Delta’s levees; and so they must all be considered to get a good sense of what the total risk involved is. The least vulnerable levees, mostly located on the Delta’s fringes, have at most a 22% probability of failing by the year 2030, even considering all these risks. Meanwhile, the most vulnerable of the Delta and Suisun Marsh levees have a mean annual probability of failure of at least 7% — and those same levees have at least an 84% probability of failure by the year 2030. The potentially severe damage that a major earthquake could induce should of course not be understated. Ultimately, though, an integrated management strategy must respond to these myriad conditions that exacerbate the fragile condition of the Delta’s levees.

6 thoughts on “Bay-Delta: Shaking Things Up”