Beyond the Bay, High-Speed Rail

Yesterday’s big news item (alas, I had not a scrap of free time to write about this yesterday, but better late than never) in the world of transportation was the Obama Administration’s unveiling of its strategic plan for a national high-speed rail system. The so-called “down payment” on this system is $13 billion: $8 billion of stimulus funds, and an additional $1 billion per year for five years proposed for the FY2010 budget. Video footage of President Obama’s announcement is posted on the White House blog; the strategic plan, corridor map, and other materials are available at this link. 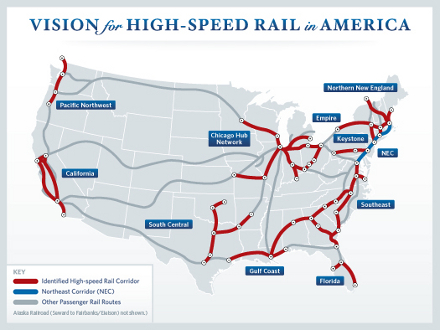 To be maximally successful, a high-speed train system cannot stand in isolation; a high-speed corridor is greatly benefited by the presence of feeder lines that run at slower speeds, but which supplement and augment the high-speed service by increasing the number of accessible destinations of the entire rail system. This country has plenty of track that could be used for just that purpose, but a great deal of it is in poor, neglected, unusable condition. Passenger rail has also played second fiddle to freight (a priority that is reflected in the FRA’s requirements for compliant trainsets that are not ideal for passenger service), and Amtrak service is slow and unreliable. Recognizing these obstacles standing in the way of the growth of passenger rail, the strategic plan declared that FRA would need to revise its safety standards to facilitate high-speed rail, and it recommended agreements between states and railroads to ensure that federal investment in existing railroad infrastructure will realize the envisioned boost to intercity passenger service.

The plan wisely establishes a few definitions to ensure that everyone is on the same page as regards terminology. “HSR-Express” refers to the type of service that pops into mind immediately when one thinks of high-speed rail: 150+ mph service, few stops, and a dedicated, grade-separated reight of way, basically functioning in lieu of an airplane or long-distance highway trip. “HSR-Regional” service is somewhat slower, 110-150 mph with more stops, and drawing some shorter-distance trips. “Emerging HSR” would cover 90-110 mph feeder service; it would share track and utilize Positive Train Control, and as ridership grows, Emerging HSR corridors could be incrementally upgraded. And finally, there is 79-90 mph conventional rail. High-speed service is roughly targeted for 100-600 mile long routes with moderate to high population density.

The strategic plan also defines three types of work that would be eligible for the $8 billion of stimulus funding: (a) “ready to go” projects (i.e. environmental review under NEPA and preliminary engineering are complete) that are of “independent utility”; (b) intercity (Section 301) and high-speed (Section 501) corridor programs; and (c) funding for planning work, so that states can ready themselves to snatch up any stimulus money that might be available in the next round. The strategic plan includes a timeline: applications for (a) and (c) above would be due by August 2009, with grants made in October 2009; applications for (b) are due by October 2009, with grants made in December 2009. A second round of applications is anticipated for 2010.

To be sure, mostly everything remains to be fleshed out at this point — including where the funds will go, and further details from the states themselves about projects and corridor alignments. Some of those details will be revealed soon enough, as states apply this summer for grant money from the $8 billion of federal stimulus funds dedicated to high-speed rail. And yes, the $13 billion that the stimulus and budget combined will allocate to high-speed rail is only a drop in the bucket of the investment we will need to make to truly turn around passenger rail in this country. But we have, at least, finally started the process of building a national rail network; and based on the the plan’s strategies, as painted in broad strokes, it is a promising start.

« Bridging the Divide
In Search of a Stable Equilibrium »