900 Folsom and 260 Fifth, two mixed-use projects that are currently up for consideration, would occupy adjacent parcels South of Market, at the corner of 5th and Folsom Streets, with the northern edge of the project just one-half block south of the new Intercontinental Hotel. Together, they promise 466 homes and 10,396 square feet of ground level retail, with spacious 19-foot ceilings for the retail storefronts. (I did not bother to add the renderings to this post, but if you are interested, you can check out this PDF, which has design details.) The two projects combined intend to pursue a LEED Gold rating, and the project website is eager to point out the many green benefits of the buildings. The graphics on the project website emphasize the plethora of nearby transit options, including pictures of a Breda LRV, a BART train, and an F-Market historic streetcar. There are also pictures of people looking quite happy while walking and biking. But let’s just cut to the chase. If this project is really so green and transit-friendly, why must the proposal include slightly more than 1:1 parking, with 470 parking spots for 466 units — encouraging future residents to drive and thus ignore all of the pictured transit options?

The proposed buildings are both located in an area currently zoned RSD (South of Market mixed-use district), and it carries a minimum of one parking spot for every four dwelling units. That there is such a large disconnect between the minimum requirement and the proposed parking is in itself a strong argument for eliminating parking minimums citywide and replacing them with maximums. This much-needed change would be partially implemented under the Eastern Neighborhoods Plan, which would rezone the 900 Folsom and 260 Fifth parcels from RSD to MUR (Mixed-Use Residential), since both parcels lie within the East SoMa portion of the plan area. Off-street residential parking provisions for land zoned MUR would be similar to the more recently adopted downtown controls — no minimum, up to a 0.25 ratio permitted by right, and up to 0.75 with a conditional use. (A draft table of the new Eastern Neighborhoods controls can be found here.) The Eastern Neighborhoods Plan, which is currently being presented at both the Land Use Committee and at the Planning Commission, has not yet been adopted and is still subject to changes from the Planning Commission and the Board of Supervisors. So it does not yet govern at the time of this posting, but, looking ahead to the near future, provision of 1:1 parking clearly flies in the face of the City’s increasing desire to eliminate parking minimums and replace them with maximums that are less than 1:1. And for the interim period until the new controls are approved, the proposed off-street parking at 900 Folsom and 260 Fifth would still require a conditional use authorization. Since the goal is to create a lively, walkable neighborhood out of section of South of Market that is dominated by automobiles and is rather unfriendly to pedestrians, the prudent course of action would be to limit parking at 900 Folsom and 260 Fifth to a ratio more consistent with the Eastern Neighborhoods Plan. 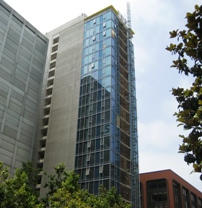 I might not have bothered to write a post only about this yet because there is still quite a ways to go in the process (notice for preparation of the EIR was issued last month). But this gravitation toward slightly more than 1:1 parking at 5th and Folsom resonates with another parking snafu from a Planning Commission meeting about a month ago that I never got to write about at the time. At that meeting, the Commissioners discussed the 631 Folsom (a.k.a. BLŪ) condominium project (pictured at right), a narrow 21-story tower that is currently being constructed on the western edge of Rincon Hill, just a few blocks from these other two proposed projects at 5th and Folsom. The Commissioners approved increasing the building’s parking allotment from 64 to 116 (still within the same physical constraints), 108 of which would be accessed by mechanical stackers. The parking is not to be bundled with the units, but that is still 116 parking spaces for a building with 114 units — once again, slightly higher than a 1:1 ratio.

Policy 30.1 from the General Plan’s Transportation Element stipulates that the following criteria (among others) be met before approving a new or enlarged parking facility:

The Planning Department actually recommended disapproval of the additional parking, because the 631 Folsom site (along with Rincon Hill, in general) is transit-rich and already has many amenities within walking distance, with even more coming in the future as the new neighborhood takes form. This recommendation to disapprove is wholly consistent with Policy 34.1 of the Transportation Element, which states, in part:

Regulate off-street parking in new housing so as to guarantee needed spaces without requiring excesses and to encourage low auto ownership in neighborhoods that are well served by transit and are convenient to neighborhood shopping.

Despite the recommendation to disapprove, the Planning Commission unanimously approved the additional parking at 631 Folsom. The justification for the approval was the need to provide 1:1 parking so that families would not be discouraged from moving into this building, which consists of two- and three-bedroom units larger than 1000 square feet in area. Commissioner Antonini supplied a statistic that suggested that the number of children under the age of 14 decreased by about 1000 citywide between 2000 and 2007, but actually increased by about 400 in zip codes 94105 and 94107. This figure is potentially very misleading, because most of the buildings located in those zip codes are not newly constructed condominiums, which is the relevant subset of housing stock. The City has not formally tracked how many families are actually moving into the new South of Market condos, and we cannot assume that every multi-bedroom condo being constructed will house a family with children — so an assertion one way or the other is necessarily speculative. Therefore, a mere desire to encourage families to live in the new buildings falls short of “clearly establishing” a need for the additional parking. Upon realizing that it had no hard data to indicate whether the new larger units were actually attracting families, the Commission also required the compilation of a database that would track this information, with the recommendation that the database eventually be made available to other City departments. Project sponsors will be required to submit a report two years after the initial occupancy date, and every two years thereafter, indicating the number of children living in each household, any vehicles owned, and other information. This data will be valuable in studying the demographic trends of the new neighborhoods emerging South of Market — neighborhoods that have been planned on the premise that residents will walk and use transit rather than drive.

If such data were available prior to the approval of the additional parking for 631 Folsom, then it would obviously be crucial in evaluating the strength of any argument that alleges a “clearly established” need for more parking. But without the data, this need has been only nebulously established, at best — and therefore is inconsistent with the Transportation Element. We need not fault the Commission for its desire to make more informed decisions, but given that we cannot force a new influx of families into South of Market high-rises who may not even want to live there, how about we deny requests for additional parking until data exists showing that there is a clearly established need for more? Or, what if we try this one on for size: the families who decide to live in these mid- and high-rise buildings actually manage to adapt their lifestyle to the city, instead of simply transplanting a suburban auto-oriented lifestyle into a dense urban setting? Although there are already some residential towers in the Bay Area, the whole notion of “high-rise living” and of a true high-rise neighborhood is a recent development, and it may just trigger unforeseen lifestyle changes. In fact, that is exactly what we have to hope will happen.

Commissioner Antonini, et al may be worried that parking limitations will discourage families from occupying the new units, but it would also behoove the Commission to be worried about the cumulative environmental impacts (and associated CEQA implications) of providing generous parking for new units constructed in a neighborhood that when all is said, done, and built, will have a population density akin to parts of Manhattan — and this in a neighborhood that is already disproportionately burdened by high traffic volumes and street gridlock associated with the nearby freeway. The large industrial blocks and wide one-way streets in South of Market, combined with the intrusive presence of a freeway slicing through the middle of neighborhoods, make this a difficult section of the city to plan well. But given South of Market’s proximity to downtown, dense development is not a question of “if,” but “when” — so any planning in this area of the City deserves all the effort and careful thought we can give. Being lenient with parking restrictions makes an already monumental task even more difficult. A strong commitment to limited parking is necessary if we want to encourage transit use and create truly successful, livable neighborhoods.